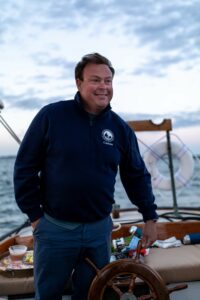 From a young age, Captain Ian was always interested in the water and sailing. His passion stems from a long line of sailors in the family and to which Ian has created his own path in the maritime world. At 19 years old, Ian left Florida and went to crew on a schooner in Camden, Maine. After three days of sailing around Penobscot Bay he was hooked, and as they say – the rest is history.

Ian has experience crewing and captaining many different types of vessels. From private sailing yachts to commercial supply boats and his favorite, the traditionally rigged gaff schooner. His journeys saw him cooking on-board yachts for royal families and crossing all of the world’s major oceans. He will be glad to share his personal story, the history of Portland, and maritime history as you sail. 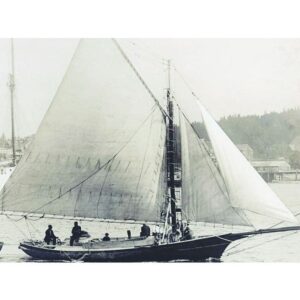 The Eleanor Hawkes is based on the Friendship sloop, also known as a Muscongus Bay sloop or lobster sloop, which is a traditional style of gaff-rigged sloop that originated in Friendship, Maine around 1880. Fishermen in Friendship and neighboring Bremen collectively originated the design, one influenced by the fishing sailboats of Gloucester, Massachusetts, particularly the schooner Fredonia of 1889.

Although familiar as a pleasure craft today, the Friendship sloop was the traditional fishing boat used off the coast of Maine, especially for lobstering, until the introduction of the gasoline engine early in the 20th century. Friendship-area boat builder Wilbur A. Morse produced many examples from the 1880s and into the early 1900s.

Want to learn more about the history of Portland and the ships of its past? Come join us!

Sail aboard the Eleanor Hawkes, a traditional friendship sloop, and enjoy a cruise of a lifetime with the best sailing Portland Maine has to offer. Book your trip with us today!