The lighthouses along Southern Maine’s coast bring in thousands of visitors each year, and for very good reason! Lighthouses are a huge part of Maine’s naval history, worn into the fabric of our livelihood since the state was founded in 1820. At Sail Portland Maine, we are lucky enough to cruise by some of these lighthouses daily on our public and private Casco Bay charters! We know firsthand that learning about the fascinating history of our coast’s lighthouses makes experiencing them from the coast that much more exciting. Keep reading to learn a bit about the best lighthouses in Maine!

Easily the most famous lighthouse in Maine, this iconic beacon is synonymous with Portland’s rocky coast and New England charm. 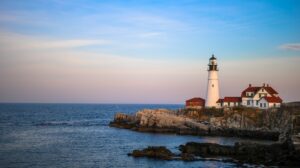 Built in 1790, the Portland Head Light was commissioned by George Washington and is still in active use today, bringing ships safely into harbor from the Casco Bay.

The Portland Head Light is located on the shore of Fort Williams Park in Cape Elizabeth, which also boasts 90-acres of lush park that sits behind the lighthouse where visitors can picnic, walk the cliffside paths, explore historic forts and fly kites. There is also a seasonal museum located within the former keepers’ quarters!

The Spring Point Ledge Light is situated on the breakwater in Southern Maine on the campus of Southern Maine Community College. Since 1897, this caisson-style lighthouse has been an essential part of Casco Bay’s history and now serves as the symbol for the city of South Portland. This lighthouse welcomes guests during open house hours and receives thousands of visits each year – many people even get married on the grassy knoll overlooking the breakwater!

The Portland Breakwater Lighthouse, also sometimes called Bug Light Park Lighthouse, is located in South Portland’s quaint Bug Light Park. Built in 1855, this lighthouse is renowned for its elegance, regardless of its petite size at only 26 feet tall. It’s truly a living history that still welcomes visitors to the historic Portland Harbor, as this area is a popular boat launch!

The Ram Island Ledge Light in Casco Bay is perched on a quarter-mile long narrow rock, locally known as Ram Island Ledge, just off the coast near the Portland Head Light. Built in 1905, the keepers used to live on this tiny island for several weeks at a time to maintain it and bring sailors safely in from sea. The lighthouse is closed to the public and is privately owned, although the grounds are open by appointment. Don’t worry, though – viewing it from the ocean is one of the best views you can get!

Built in 1871, the Halfway Rock Lighthouse is located in the Casco Bay between Cape Elizabeth and Cape Small, which is how it got its name. The Maine Preservation has actually declared it one of the “Ten Most Endangered Historic Properties’ ‘ in the state due to its compromising location. This lighthouse remains active today, guiding ships through the dense fog that can make sailing a challenge. Though it’s not open to the public, experiencing this lighthouse by sea adds to its dramatic setting!